€2bn plasterers who buy when the price is right 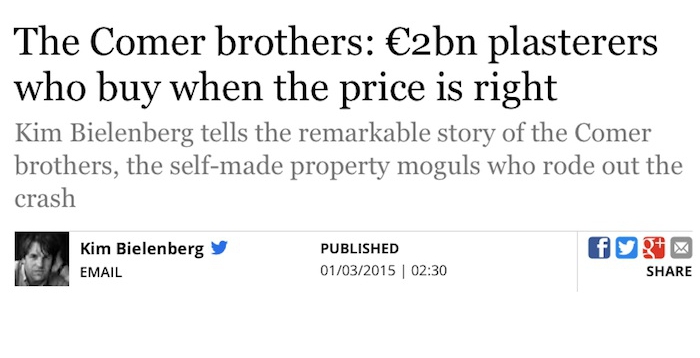 Luke, the older of the two former plasterers from Glenamaddy, Co Galway, tells Weekend Review: "It's all about timing and pricing. If you buy low at the right time, no matter how thick or stupid you are, you will make money."

The Comers are the ultimate example of builders who rode out the crash by following their own golden rule of investment.

"You want to be running in with your cash and spending money when everyone else is running out," says Luke.

The American billionaire Warren Buffett spelt out the same approach to buying up assets in a different way. He advises investors to be fearful when others are greedy, and greedy when others are fearful.

The Comers left Ireland in the 1980s to seek their fortunes in Britain and saw that country overheating, before turning their attention to Berlin as Germany suffered a deep recession.

It was when Ireland was virtually bankrupt in 2010 during the inglorious Cowen years, with the IMF knocking on our door, that the pair of ex-plasterers quietly turned their attention to their home country again.

As seen in independent.ie.  For full article click here