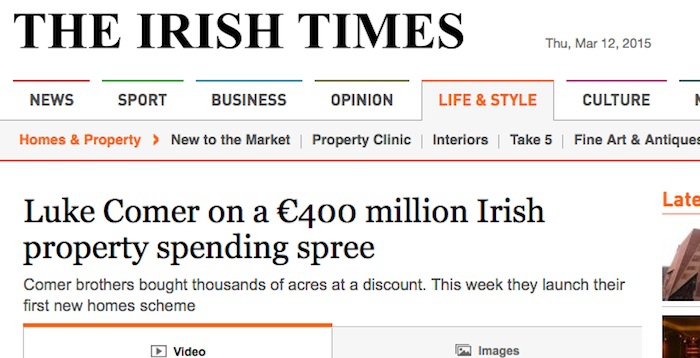 Luke Comer, who with his brother Brian, has built a £2.5 billion property empire between the UK and Germany over 30 years, says he stayed in one of the farms last night. The “farm”, it turns out, is Comer’s Dunboyne stud farm in Meath, while another “farm” of his is Castletown Demesne, a Georgian mansion on 400 acres in Kildare he bought in recent weeks for €10 million.

Understatement would be a strong suit for the Comers. Their rags to riches tale has been well documented, with far more emphasis on the rags (a tough upbringing in Glenamaddy, Co Galway, plastering walls in the cold until their fingers bled) than the riches (they are tax residents in Monaco; his brother, a keen golfer, bought a nine-hole golf course in Hertfordshire as a family home).

Since turning their sights on the Irish property market in 2010, they have hoovered up thousands of acres of property at a heavily discounted value. Often they buy at a 90 per cent discount on peak loan values, applying a general rule of thumb “if it cost more to build than the asking price the risk is minimal”.

As seen in The Irish Times, for full article click here