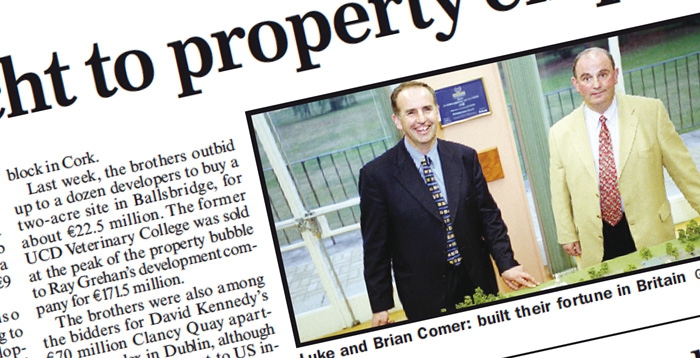 The Comer Group has acquired one of the biggest hotels in the west of Ireland, the Connacht Hotel in Galway, in an off-market deal.

The hotel purchase is the latest in a string of property deals by Luke and Brian Comer, the brothers behind the property group. In a letter to staff sent out by hotel manager Shay Livingston and financial director Jonathan Duggan, it was confirmed that the Comer Group had bought the hotel
for an undisclosed price, and that Livingston and Duggan would continue to run the hotel through a
newoperating company.

In the letter, Livingston stated that the deal had left the management team ‘‘far more confident of
the viability of the hotel’’. It said the takeover was in ‘‘the best interests of the hotel and its staff’’, andwould ‘‘protect our staff and the hotel fromthe recent financial uncertainty regarding the future
of the hotel’’. Formerly known as the Carlton Hotel Galway, the three-star hotel was rebranded as the Connacht earlier this year.

The hotel is among the largest in the west of Ireland, with 370 rooms and 185 staff. The Comer brothers have been scouring the Irish market for property acquisitions since 2011, after building their fortunes in Britain. This month, they also complete a dealworth at least 8 million Euros to buy
Jim Mansfield’s Palmerstown House estate and golf course, sold at the behest of the National Asset
Management Agency (Nama). The brothers have also been active in the hotel market in the west
of Ireland, buying the Corrib Great Southern hotel as part of a Galway portfolio for around 9
million Euros.

The Comer Group is also among the few investors looking to buy into the residential  development market, and has spent around 20 million Euros on apartment complexes in Santry and Blanchardstown, and over 16 million Euros on one block in Cork. Last week, the brothers outbid
up to a dozen developers to buy a two-acre site in Ballsbridge, for about 22.5 million Euors. The former UCD Veterinary College was sold at the peak of the property bubble to Ray Grehan’s development company for 171.5 million Euros.

The brothers were also among the bidders for David Kennedy’s 70 million Euro Clancy Quay apartment complex in Dublin, although they eventually lost out to US investment giant Kennedy Wilson.