From plastering to property moguls 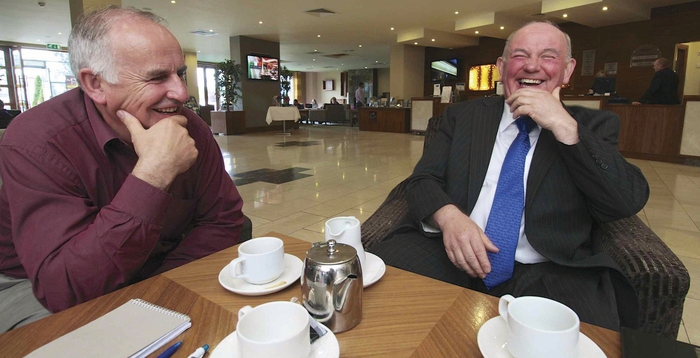 It was a wild, winter’s night. Brian and Luke Comer’s hands were bleeding and they were crying with tiredness and pain. They were being battered from all directions by torrential rain. But they continued to plaster. It was 4am and the teenagers from Glenamaddy, who often worked 17-hour days, knew they had to get the Kerry Co-Op job finished.

That was close to 40 years ago but the billionaire brothers with the Midas touch remember it as if it were yesterday.

“That was the first money we made and it was savage hard work,” recalls Luke. “I remember the amount of times we were there until 4am with the blood running down our hands and it lashing from the heavens. We were crying with tiredness and pain. When you earn money like that you value it.”

They were just teenagers and were earning £1,400 a week between them in the late 1970s. But the work was hard and the hours were long.

“We knew we couldn’t stick it. We had to be out of it in our early twenties,” says Luke.

They set up their own plastering business before moving to London in the mid 80s. They worked hard plastering up to two flats a day - most people would take a week to do one.

“Every week we’d need two articulated lorry loads of plaster,” says Luke. “There were no cranes or forklifts on the site, we had to lift the plaster, 200 weight at a time, up a flight of stairs.”

Today their company, the Comer Group, an international commerical property company and award winning developer of luxury homes, has residential and commercial interests in Germany, the UK and Ireland. Their assets are worth £2.25 billion. “A conservative evaluation would be we’d be worth around £1 billion in England, three-quarters of that in Germany and half a billion in Ireland,” reveals Luke.

They have 500 companies worldwide and reportedly have projects in England, Belgium, Germany, New York and Uganda. They have been hitting the headlines in recent years over their multi-million euro property spending spree in Galway. It included three large development sites on the eastern side of the city and a four acre development site in Eyre Square (including Odeon House, O’Connell’s Bar, An Pucan Bar, and a range of buildings on Forster Street as well as residential buildings on Forster Street in addition to apartment blocks in Newcastle, Knocknacarra and Oranmore. They are Galway FC’s main sponsors, funding the League of Ireland side to the tune of €300,000 over three years.

Luke is highly regarded as a racehorse trainer and owns 70 racehorses and a stud farm in Dunboyne, Co Meath. Brian owns 10 horses. They have five stud farms in all, two “huge” ones in England and a few in Ireland. Some are very successful.

“We haven’t time really to concentrate on it. If we had time we would make a success of it as well,” Brian says.

A near fatal car crash in London in 1992 on their way to work changed everything for the Comers. Brian was seriously injured when Luke’s Mercedes 500 skidded on black ice and crashed into a tree, cutting the car in two. Brian was hospitalised for seven weeks, 17 days of which were spent in a coma. He returned home, paralysed on one side, in a wheelchair. Luke escaped with a few broken ribs.

“I was supposed to never walk again,” says Brian. But he defied the odds and went on not only to walk but win two golf tournaments. He is “not a bad” golfer, he says, - he has a handicap of 12. The fact that he lives on a golfcourse in Hertfordshire helps.

Luke lived nearby before moving to Monaco in 2004. Why? “It’s a very friendly place,” he says with a twinkle in his eye. Would he ever mean that as a tax haven it is kind to his groaning wallet?

Brian has not worked on the building sites since his accident. But in one way, he says, it was a blessing in disguise.

“After that we really pushed on. I used my brain instead of my muscles. I figured I had a bit of a head.....,” he says with a laugh. He also had a natural flair for selling and drove up the company’s sales phenomenally.

Shrewd judgment, a willingness to take calculated risks and a steely determination to overcome any obstacle has paid off for the developer brothers. But they still say hard work is the secret of their success.

In person, they are warm, witty and refreshingly self-deprecating. They are great company and the two-hour interview is peppered with laughter. Famous for being media shy they prefer to keep a low profile. However, when their name was linked (erroneously, they insist ) with a consortium bidding £64 million for Aston Villa FC in 2005 they were catapulted into the limelight. Overnight people began to ask who are the Comers and how did they accumulate such wealth.

Luke (56 ) is the fourth eldest and Brian (54 ) is the youngest of a family of eight from Shannaugh in Glenamaddy. Luke left school early, Brian stayed on to do his Leaving Certificate.

“Somebody said to me a while back: ‘Imagine if ye went on to further education,’” says Brian. “I replied: ‘Imagine if we left school at 10!’”

They were born in Rosscahill, their father was working in Connemara and their parents rented a house there. They were “wild as March hares,” says Brian with a grin. But in between the mischief there was hard work. “We were working since we could walk, thinning beet,” he adds.

Their mother died aged 49 when Brian was just 15 and Luke 17. She had been unwell throughout their childhood and when their father worked in Connemara the neighbours, the Walshs and Gorans, used to care for the children.

How did her death affect them? Luke says it made him realise that life is very fickle and that “tomorrow is promised to no one”. Brian says he missed her hugs and having a confidante.

Both their parents were from Glenamaddy and moved back there when the children were small. Their late father Luke, who died when he was 83, was ambitious and worked around the clock. He once borrowed £10,000 to buy one of the biggest bulldozers on the market. “Whenever we hear people criticising him we think of how he was light years ahead,” says his son and namesake.

Brian says he quotes his father sometimes. “He used to say: ‘There is only one way to do anything and that’s to go and do it.’ The work ethic was bred into us.”

“He was a great worker,” Luke recalls with admiration. The two of them [both parents] were. They taught us how to work and to be reasonable, decent people.” Their father lived to see their success and was very proud of them.

Brian and Luke were delighted when Galway FC named the stand at Eamonn Deacy Park in memory of their late father and their uncle, Michael Comer. They are glad to be involved with the club. They have a soft spot for club chairman, the former school principal Bernard O’Connell, and say he is a “mighty” speaker.

Their mother, who had battled illness for years and eventually succumbed to pleurisy, had to fend for herself from an early age. Her mother perished in a fire when she was 30 - her dress caught fire. “Her father was crippled from a young age so she had to rear her brothers and sisters. She used to plough on contract to support them,” reveals Luke.

They were surrounded by strong women. Their aunt Bridie, who owned Kelly’s Bar in William Street West with her husband, Roddy, was a “fantastic” woman, they say.

“It was well known she had a lot of money,” says Luke. “I remember a man saying to her one night, ‘Fill up the pint well, it’s no use keeping your money. Sure the next generation will only squander it.’” Bridie, not to be outdone, retorted: “Well if they enjoy spending it as much as I enjoyed making it, good for them.” Brian and Luke love that story.

Despite their wealth the Comers do not have an extravagant lifestyle. They do not own yachts or aeroplanes, choose to fly economy class and do not splash out on designer suits. Luke refuses to pay more than €200 for a suit or €60 for shoes.

“Wealth hasn’t changed us in the slightest,” reveals Brian who says if all their businesses “collapsed like a deck of cards”, he would not mind living in a caravan. “Someone who was selling a yacht once asked me to buy it. I told him I was only on one boat, from Holyhead to Dublin, and I couldn’t wait to get off it! And he laughs heartily.

In fact, he warns the women in his office in Berlin to get the cheapest flight available. “I give off to them if they get me a dearer one. The girl in the office says (he puts on an imitation German accent ): ‘But Mr Comer you have lots of money.’ “But I tell her I didn’t get it by throwing it away.” Both he and Brian start laughing again. It’s infectious.

Brian says the difference between first and economy class is an extra scone. Luke says the movies and dinner are the same. “And you wouldn’t want more than one glass of wine. Maybe the seat is a little less comfortable. But anyway pure tiredness will make you sleep.”

Racehorses are the “worst” thing they have wasted money on, reveals Luke. “But we didn’t waste it in Ireland.” He admits they wasted a few million on their horses.

You get the feeling that they love the chase as much as the conquest, the cut and thrust of business, the risk taking and eventual deal clinching. And like all great risk takers they have experienced highs and lows.

“We bought a lot of ‘pups’, a lot of developments that lost money,” says Brian. Luke adds that they lost “big money” - 30 million one night in 2009 on the stock market. “We lost 10m in 20 minutes. None of us felt too good afterwards,” says Luke in the understatement of the century. “Losing gets you down. Sleeping at night is a harder thing to do when you are in mental turmoil. At 2am a molehill looks like a mountain.

They say they are happiest keeping a low profile. “We wouldn’t be the best public speakers,” comments Luke. “And we wouldn’t want to blow too much. Not that we have anything to blow about,” he adds hastily.

How would they like to be remembered? Brian looks solemn and I await a major pronouncement. “Maybe someone might say he should have been in films. Horror ones!” His face creases with laughter.

Luke would like people to recall him as a “fairly reasonable” person. “I hope that nobody says: ‘I’m glad that b...... is gone.’”

Article from the Galway Advertiser (online)